​Following the conclusion of the original movie trilogy, Lucasfilm Ltd. again began working with Nelvana to produce not one, but two separate Star Wars cartoon series that would launch together. Droids would look very similar to animation style seen in The Holiday Special, but would take place before the events of the original Star Wars movie, following the adventures of R2-D2 and C-3PO before they met Luke Skywalker, while Ewoks showed us the adventures of the furry residents of the forest moon of Endor before (or after) the events of Return of the Jedi and the Ewoks live action movies. To go along with the TV series, several book adaptations of Droids and Ewoks episodes were created and characters from the cartoons were added to the Kenner Star Wars action figure collection. Marvel comics were also created based on both series but with all new adventures, including a memorable crossover.
In 1985, the Star Wars galaxy was a much smaller place than it is today. While a long running Marvel comic series and several novels did exist, for many fans, their exposure to Star Wars was limited to what they saw on the screen. The Droids and Ewoks adventures took Star Wars beyond the movies to the small screen in a tradition that has since been carried on by the Clone Wars microseries, The Clone Wars, Star Wars Rebels, Resistance, the various Star Wars LEGO animated series and animated online specials.
This particular site will focus solely on the "canon" of the Droids and Ewoks cartoon series and the comics, books and toys that were based on it. Over the years, additional stories have been created for some of the characters, aliens, etc., that appeared in Droids and Ewoks, but this site's aim is to provide information only as it came to us from Droids and Ewoks.
Finally, this site is a labor of love. It has existed in several forms since the early 2000's, both unpublished and published. It is certainly not a complete, exhaustive resource, but I hope that readers will at least be able to find something of interest here as they discover once again, or for the first time, the animated adventures of the Droids and Ewoks. 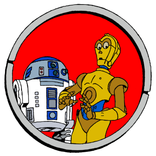 This is an unofficial fan created site and is not affiliated with Lucasfilm Ltd. in any way. All character names and likenesses are the property of Lucasfilm Ltd.